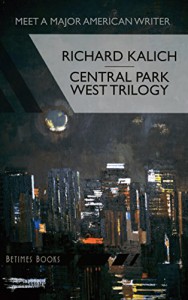 Sometime in the '90s I acquired a strange little book called The Nihilesthete by Richard Kalich: 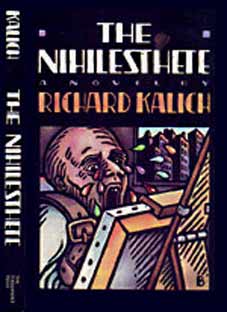 Not only was the cover artwork strange, but the format of the book was peculiar, being of unusually small dimensions and filled with 143 pages of tiny print on cheap paper. This was an edition published by Compac Reader Group and could be found at check-out stands of various stores, alongside gum, Slim Jims and the Weekly World News. The publishing outfit had other titles too, each small enough to fit in a shirt pocket. I don't know if they are still around or not, but it's been years since I've seen that sort of format. I don't think that was the edition in which The Nihilesthete was originally published, but that's the one I have.

Anyway, I didn't read The Nihilesthete for many years and it was only when I re-discovered it again among my things in 2011 that I read it. The book amazed me and I liked it so much that I wrote my first crappy little book review on a blog that I was thinking about keeping. The review itself was not very well written and I kinda dumped the blog, but I guess it's still up because I recently received an e-mail from Svetlana Pironko of Betimes Books asking if I would like to read Richard Kalich's newly published Central Park West Trilogy, a collection of three of his novels, including The Nihilesthete. Naturally I said yes. I'd been meaning to read more of Richard Kalich's stuff and this seemed like a great opportunity. I don't usually accept review requests (I'm mean, not that I get that many anyway), but having read The Nihilesthete, I knew Central Park West Trilogy was something right up my alley.

As I mentioned, Central Park West Trilogy is a collection of three of Kalich's novels:

The Nihilesthete (1987), the story of a perverse NYC social worker who, upon the discovery of a disabled, mentally challenged youth with a unique affinity for art, begins to slowly weasel his way into said youth's life with the ultimate goal of crushing the young man's spirit.

Charlie P (2005), the surreal, absurdist chronicle of a man who "lives life by not living it," whose days are filled with outlandish daydreams and obsessive self-examination, told in a series of vignettes rather than through a cohesive narrative.

Although the three novels are not connected through continuity, they do form a sort of trilogy within the context of the author's life. This amounts to a sort of imagined autobiography of the author, a Kafka-esque metafiction about a man who is trapped by his own obsessions, ambitions and the overwhelming encumbrances of life. Looking at the collection as a whole, Central Park West Trilogy is a stimulating glimpse into Kalich's unusual approach to his art and his craft, as well as his unique approach to the absurdities of life. I think Albert Camus would have approved.

Taken individually, the novels are very different in style. The Nihilesthete takes a more conventional approach (in style, if not in subject matter) by adopting a first-person POV in diary mode. Charlie P and Penthouse F diverge radically from convention but are still exceptionally engaging and readable.

If I were to nit-pick, however, I'd have to say that I find the arrangement of the novels curious since Charlie P concludes the volume rather than Penthouse F, which is chronologically the latest. I think a chronological arrangement would have provided a better flow, Penthouse F being a stronger work than Charlie P, in my opinion. But that's just my personal nit-pick and it doesn't negatively affect the collection as a whole too much.

In conclusion: ★★★★✩ (4/5) Central Park West Trilogy is a much welcomed collection of Richard Kalich's unique vision. Horrific and twisted at times, and dryly humorous at other times (and sometimes both at once), Kalich's grotesqueries do not trigger outrage so much as fascination. Some horrors make you want to turn away; Kalich's make you want to peer in deeper.

I have to admit that I've been reading more pulp trash than "literature" of late, and I'm not really "in the know" these days with what's going on in that world, but I certainly think that Richard Kalich deserves a wider readership (although I can't be sure he wants one; there's not a lot about him on the web. He seems rather low-key). If you are into the offbeat, I highly recommend that you give him a try, and with Central Park West Trilogy you can give him three tries at one go.