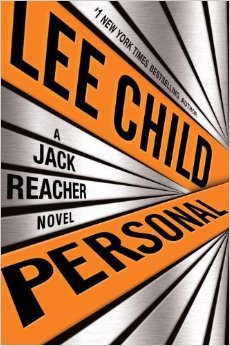 Reacher is back…and this time it's personal! (said in my best movie trailer guy voice).  It's also the name of the book, Personal, Lee Child's nineteenth and newest Jack Reacher thriller. In this one, faces from Reacher's past come back to haunt him. One is a deadly sniper he busted when he was a military police officer and who has been just released from prison, hungry for revenge. The other appears in the form of a young CIA officer who reminds Reacher of an army colleague whose death he feels responsible for. Ghosts of the past all around, Reacher lends his assistance to a CIA investigation regarding a potential assassination attempt at the G8 summit, an investigation that takes him from the back woods of rural America to the streets of Paris and London. This is convenient because Reacher needed to get his passport renewed anyway…

As usual, Child doesn't fail to please with Personal. It's got everything you expect from a Reacher novel: a little sleuthing, some unexpected violence and a hero who likes to make his own rules. And Reacher  comes back with some good tough guy one-liners. After killing a scumbag thug in merry old England, Reacher defends his act to CIA Agent Casey Nice,  telling her he was "too stupid to live." Nice says, "Stupidity isn't a capital crime. And there's no death penalty here, anyway," to which Reacher replies, "There is now."

This isn't to say that Personal is a masterpiece or anything. The plot is pretty goofy and Reacher, as he is wont to do, just sort of blunders through the investigation, accenting his copious use of unannounced violence with the occasional flash of plot-saving brilliance. In other words, it's a Reacher novel. I will say, though, that I was disappointed that Reacher mistakenly says that "force…is the product of mass times velocity squared," which is incorrect. Force equal mass times acceleration. I would have thought that Reacher, being a pretty sharp fellow, would have known this. Maybe he just got confused in the moment with kinetic energy, which is one-half of mass times velocity squared. After all, he was kicking in a door at the time. Whatever.

Personal is a fun, quick read and sates my Reacher fix. Reacher fans will enjoy.