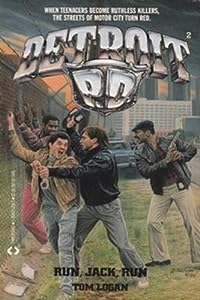 When a couple of high-profile murders occur, Commander Cal Rivers pushes his officers of the 14th Precinct to find this killer. Things get hot, though, as a new breed of criminal threatens to wage war on the streets of Detroit. Calling themselves "New Jacks," these youthful gangsters push drugs, pimp girls, extort and murder. It's up to the brave men and women of the 14th to stop them!

Run, Jack, Run was the second in the 1980s cop series Detroit P.D.. There doesn't seem to be much on the internet about this series, although I do know that "Tom Logan" was a joint pseudonym for co-authors Robert Marshall and Victoria Thomas (source: Michigan in the Novel, 1816-1996: An Annotated Bibliography, Robert Beasecker, ed.) and it looks like there were at least four in this series. I got this from my local used book store and thought the cover was pretty cool. It got me in the mood to watch old TJ Hooker and Hunter reruns.

The actual book inside didn't really live up to my expectations, though. While it was a serviceable read without being great, the plot seemed to sort of ramble along with various officers of the 14th Precinct doing their own things until it improbably coalesced into a rather unsatisfying conclusion. I think the main reason that I didn't feel much of a connection with the story was because there were so many cops to keep track of and the narrative alternated between them. Cal Rivers, commander of the 14th, an African-American veteran officer with voice "reminiscent of James Earl Jones," was pretty central to the whole deal and was a good character, but I would have preferred if the story just stuck to his perspective rather than spreading it throughout the precinct. Although the overall story wasn't remarkable, it was still an okay read and fairly fun.

Most of the other officers were drawn pretty well, even if they were a bit clichéd (but that's not always a criticism, especially for this kind of book) and their stories were interesting. There was also some interesting social commentary regarding the AIDS issue when a gang member carrying the AIDS virus gets arrested and a brutal cop named Raccianello freaks out about it, thinking that he's going to get infected after he beats the guy up while in custody. So there's a little bit of education there about how AIDS works and all that, but I realize that's not why most people read action stories. Still, though, I thought it was interesting that they did that, this being a 1988 novel.

Most of all, though, I thought the portrayal of the "new jacks" was pretty amusing. It was like a portrayal of inner city youth gangs through the perspective of an average white-collar suburban male. Not offensive, really, just kinda goofy, like the stuff you'd see on a TV cop show, with gang bangers wearing "Bill Blass jogging suits" and saying stuff like "Yo! Be the man! We're in charge!" Coincidentally (or not), 1988 was also the year that the film Colors came out, so I guess there was sort of an emerging general mainstream awareness of gang violence and urban culture. There was also a Spuds McKenzie reference (and if you don't know who Spuds McKenzie is, please keep that to yourself-- you'll make me feel old!).

All in all, Run, Jack, Run was not a great read, but fairly fun and I'd be interested to read the rest of the series should I happen upon them.