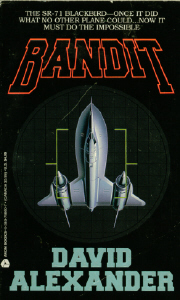 When US orbital surveillance satellites get knocked out one by one, the United States has only one choice: reinstate the SR-71 Blackbird spy plane! Able to fly at over three times the speed of sound and at the upper limits of the stratosphere, the Blackbird was a marvel of aviation. The question is who will fly it? The only one with the skills and the guts to fly this supersonic wonder is Lieutenant Colonel Dan Cox, a former flyer, now retired and hanging out in Bali where he's gone native. A couple of CIA guys are sent to retrieve him and Cox grudgingly accepts this one final mission. He heads back to the US for refresher training and a mission briefing and learns, to his chagrin, that his co-pilot is a woman-- a pretty blonde named Lieutenant Amanda Gilroy. Together, they must fly into the unknown and brave an explosive confrontation with the fate of the nation and the world resting at their fingertips!

I got this at my local used book store hoping that the author was the same David Alexander that wrote the super-nutzoid '80s men's adventure series Phoenix and Z-Comm (under the house name Kyle Maning). It took some time to figure out (since there are several authors named "David Alexander"-- the Goodreads' author entry is not accurate), but this indeed turned out to be the case (and this is his website, by the way). Unfortunately, instead of ultraviolet action schlock, this appears to have been an attempt at a "normal" thriller and is kind of bland.

The set-up is classic action movie: disillusioned hero reluctantly returns for one final mission, teaming up with an apparently incompatible partner against impossible odds. Although this is a bit of a cliché, I have no problems with that at all. Sometimes these kind of tropes lend a sort of comfort that I like. The problem was mainly that these tropes were never really carried out beyond their introductions. Cox was supposed to be a mean S.O.B., a proverbial "loose cannon who doesn't play by the rules," but he really wasn't such a cowboy. He was just a little gruff at times. Cox initially didn't like the idea of flying with a woman, but it turned out to never be an issue. I was expecting arguments and disagreements before an eventual garnering of mutual respect (just like in the movies!) but that wan't the case. They seemed to get along fine. Basically, the tropes in Bandit were empty promises and that was disappointing.

Alexander's writing in Bandit overall was fairly decent, but the narrative POV-hopped a lot and fell back on a lot of third-person omniscient POV. Also, there is a parallel story going on following the exploits of a Russian commando unit as they also investigate, which, while related to the main plot, was distracting. These things, along with the lack of characterization, made the book seem more like an outline or a treatment than a fully-realized novel.

I will say, however, that a lot of the details about the SR-71 were pretty interesting (like the fact that they crammed the tanks so full of fuel for flight that it was literally seeping out through the seams, and things like that). It was clear that a lot of research went into Bandit. I'd almost think that Alexander was a pilot himself (I don't know if he was), the details being so specific. On the other hand, sometimes the details worked against the story, especially when it came to equipment specifications. I guess it's a "guy thing" that we love that kind of stuff, but it was a little too much. I really don't care that a minor character is using a PRC-319 burst transmitter unit to communicate with his superiors, or that Cox has an AN/APG-67 threat display in his cockpit, or that the Russian commando unit was armed with Spectre submachine guns and Ultimax 100 light machine guns and that Cox was issued a Fabrique Nationale P-90 in 5.7mm designed for penetration of blahblahblahblah--so what? I suspect all that stuff was to appease the gun and tech nerds, and there is an audience for that, but I find it tedious.

Overall, Bandit is a quick and diverting read, but fairly bland. Alexander's writing is good enough to keep my interest, but is a far cry from what I expected, knowing about some of his other stuff like Phoenix. Written in 1994, toward the end of the action-schlock-men's adventure-era, I suspect Alexander was trying to cater to a kinder, gentler audience, but ended up with something sterile and banal. Still, I'm glad I found and read Bandit. It wasn't awful, but it also isn't a title that I can recommend.