I seldom get an opportunity to go exploring around town to see what's new. In fact, I rarely even have the desire to because traffic these days is a nightmare and just getting worse, so unless I'm running low on booze fresh produce, I sit my misanthropic ass at home on Friday and Saturday nights and enjoy a book. And fresh produce. However, a few weeks ago my dentist told me during a visit that I should get a bite guard. "Do you grind your teeth at night? Are you under a lot of stress? You have some wear on your teeth." No doubt due to the increased traffic.

Happily, on the way home from the dentist I discovered a rare and beautiful thing: a used book store! I thought these creatures were extinct (at least locally)! I walked in, eagerly anticipating the treasure trove of paperback originals that surely must lie inside. The older, mild mannered gentleman (who I learned also owns the place) welcomed me and I said hello back, telling him with some embarrassment that this was my first visit here (because, by the looks of the place, it had been there for at least several years. I must have passed by it countless times without even noticing). He asked if there was anything in particular that I was looking for. I timidly told him that I had been reading a lot of these "men's adventure" books recently, slightly embarrassed at admitting to enjoying this low-brow form of literature. "You mean like The Executioner?"
"Yeah!"
"Sure, lemme show you where they are. They're a lot of fun."
When I finished browsing and went to pay the man for my stack of books he chuckled when he pointed to this one, Death Merchant #10: The Mainline Plot and said, "I remember I read this one about thirty years ago, when I was in the air force." 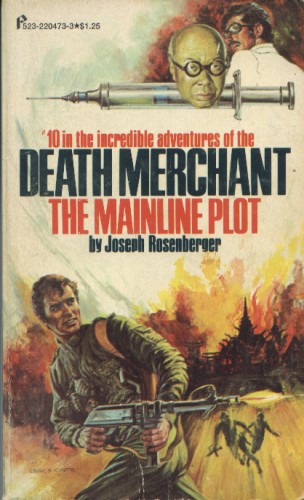 (Pic above is stolen from Marty McKee's blog, but if you click on it you can give him some web traffic. His blog is pretty cool).
Moral of the story? Support your local booksellers! They are probably pretty cool cats. And that's how I got this book. Joseph Rosenberger's Death Merchant series has been one I have been wanting to read since reading Roseberger's C.O.B.R.A. #3: The Red Dragon Operation, which was pretty damn awful, but awful in a wacky, ridiculous way. From my online research, I knew that Joseph Rosenberger was not a house name or a pseudonym. He actually wrote every freakin' one of the 71 volumes in this series, as well as various other oddball series like the aforementioned C.O.B.R.A. series.

Known to allies and enemies alike as the "Death Merchant," Richard Camellion is a freelancer who takes only the most difficult, the most hopeless jobs from the CIA. At $100,000 a job, they don't come cheap, but Camellion gets results. In The Mainline Plot the Death Merchant is hired by the CIA to foil a joint Mafia-Corsican Mob-North Korean plot to smuggle a particularly potent form of heroin known as Peacock-4 into the US, thereby turning a whole generation of American youths into junkies! They must be stopped and the Death Merchant is just the one to do it!

Neither subtle nor sophisticated, you'd think the whole thing would be a snore-fest (and parts of it was. I mean, a twenty page chapter describing a shootout does get tiresome) but Rosenberger's particular authorial idiosyncrasies are what make this a disaster to behold. If there is one thing I have learned from reading a couple of Rosenberger novels is that he is, if anything, consistent.

In The Mainline Plot we have:
Long, detailed fight scenes filled with excruciating minutiae of how a human body can be destroyed:

Two explosive shells hit Angelo Debelligofaci in the side and exploded like loud firecrackers. Three punched into Santo the Animal. Three more loud bangs and the Animal fell apart--one arm blown off, a foot of ropy gray-white intestine hanging out his belly like a German sausage. Debelligofaci wasn't any better off. He crashed dead to the floor, four bloody rib ends sticking out.

Names and details on the lives of nearly every faceless goon the Death Merchant kills:

Bocca--an ugly slob who resembled a good-looking orangutang--loved big cars, black women, and fancy underwear. He also loved life. He lost all four within the twinkling of half a dozen explosions that blew apart his head and tore off both arms.

The three Mafia gunmen died quicker than it takes a judo expert to mug a midget.

The area behind the partition resembled high noon at wrecksville!

And lots of exclamation points…whether they're needed or not! The writing is at level 11 on the Pulp-O-Meter™ (and it only has ten levels). On one occasion, while killing some Corsican mobsters, Camellion says to them, "Au revoir, my halfwits!" Stuff like this make Rosenberger a hoot to read. I haven't even mentioned yet his special CIA designed submachine gun that has a whopping capacity of 3,117 shots, all explosive tipped bullets. One aspect absent from this book, and something that I understand appears with some frequency in later books, are the supernatural, fringe science and conspiracy theory wackiness, like UFOs and such.

Besides all this wackiness, I also find the author Joseph Rosenberger fascinating (and once again I must point out Joe Kenney's blog post wherein we catch a glimpse of Rosenberger's sad, fevered mind). We learn in The Mainline Plot that Richard Camellion's middle name is Joseph. Rosenberger's middle name was Richard. It's not a stretch to assume that the Death Merchant was a Walter Mitty version of the author, sharing many viewpoints. For one, both Camellion and Rosenberger hate religion ("The mobster lied with all the expertise of a priest or minister.") Interestingly, Camellion is critical of the South Korean government at the time for persecuting a Christian group with suspected leftist tendencies. The book (strangely enough) opens with this, and I was rather surprised at Rosenberger's awareness of the South Korean political climate in 1974, as well as his stance.

Unfortunately, another shared attribute is the racism. While Camellion reflects on the fact that he likes the Korean people pretty well, as well as Korean food (who doesn't?), he calls the North Korean agents "slant-eyed slobs." The Mafisosi get called "wops" (or, my favorite, "greasy garlic snappers"). An innocent Puerto Rican truck driver gets called a "spic." It's like Archie Bunker wrote this book. Few things piss me off more than bigotry, but it's difficult to really be offended because the whole deal is so ridiculous. It just sort of leaves me flabbergasted. It doesn't get a pass, but it is what it is. After reading Rosenberger's letter on Joe Kenney's site, I just feel sorry for the old, alcoholic, bigoted crank.

The Mainline Plot isn't good by conventional standards, that's for damn sure, hence the two star rating I give it. But to purveyors of action-trash lit (such as myself) it's gold. I can't wait to encounter more of this insanity.
Tweet