No Quarter Given (The Sharpshooter #8)

In the '70s there was an abundance of "war against the Mafia"-type "men's adventure" books. Bruno Rossi's The Sharpshooter was one of them and after reading in various blogs about the over-the-top violence and sleaze in this series I knew I had to check it out!

I lucked out, scoring a cheap copy online, with this one, No Quarter Given, the eighth in the Sharpshooter series. 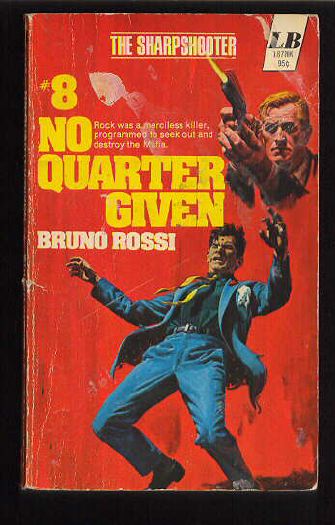 No Quarter Given has Johnny Rock, killer of Mafia goons, taking a small vacation from killing Mafia goons. Why does he kill Mafia goons? No backstory is explained in the text--it plunges right into the action, but it has something to do with the Mafia murdering his family…or something like that. The back cover copy reads:

When his parents were slaughtered by the Mafia, something snapped inside Johnny Rock's head. From that moment on he became a relentless killing machine, programmed to seek out and destroy the mob.

You can probably tell that characterization is not a high priority with this series, but it doesn't really matter. He kills Mafia goons, is really good at it and loves his job.

This vacation, however, turns out to be less relaxing than expected when a sixteen-year-old stripper/prostitute named Mimi approaches him asking for help. She's been forced to work as a prostitute by the Mafia. A local Mafia group has infiltrated the US Naval base where Mimi's father works as a civilian commissary manager, but the Mafia has framed him for embezzlement and he now rots away in prison. It doesn't take long for Rock to decide. He busts Mimi out of the stripper joint, killing three goons with aplomb, and they work together to destroy Joe Barbagallo, the Mafia boss who's running the show on the naval base, as well as an officer's club-type bar on the side.

The violence in No Quarter Given was not as extreme as some other volumes seem to be (from what I can tell), but it is still pretty whacked out. To call Rock a "killing machine" is somewhat inaccurate because machines don't enjoy what they do. Johnny Rock does and is perfectly happy to kidnap Mafia thugs, murder them, mutilate their bodies and dump them somewhere as warning signs.

Charging like an enraged beast, using both his erect thumbs like daggers, Rock gouged the man's eyes, twisting his thumbs, jabbing them until blood poured.

Then he pulled out his Beretta and shot him dead.

"That takes care of that," he said under his breath to Mimi.

Mimi, the gal that Johnny Rock is helping is a pretty fun character. She's a real firecracker with lots of lively dialogue. She's also pretty horny, which is somewhat problematic since she tells Rock from the outset that she's only sixteen. Apparently Rock didn't believe her because they get it on quite frequently. Later she tells him again and he says, "Forget it. If I get picked up for anything it'll be for contributing to the delinquency of a minor." I don't think that'd fly these days. At any rate, and despite the fact that Mimi is a target of much of the sleaze in the book (one mobster violates her with the muzzle of his gun), she's got a smart mouth and is a fun character to read.

Speaking of sleaze, there's plenty of it in the Mafia sex clubs, and Joe Barbagallo, the slovenly mob boss who's Rock's next target, is in charge of it all. Like Mimi, Barbagallo is a much more interesting character than Johnny Rock, with dialogue that would make Quentin Tarantino proud:

"Listen, you cocksuckin' motherfuckers, when I fuckin' tell you to break that fucker's ass, I don't mean no tomorrow. You shits listenin' to me?"

Bruno Rossi is, of course, a house name, and I haven't a clue who actually wrote this one. Sources have indicated that the editor for this series was a fellow named Peter McCurtin, who also edited another series called (ahem) The Marksman, featuring a guy named Magellan who, for all intents and purposes, is basically the same character as Johny Rock. Funny thing is, there were two or three instances in No Quarter Given where Rock is mistakenly referred to as "Magellan!" Clearly, these stories were pretty much interchangeable. They could crank out stories for either series, saturating the market. I imagine half-drunk, chain-smoking writers pounding away on their Royals at three in the morning churning out these books. Spelling and grammatical errors are littered throughout and, on at least one occasion, a sentence will break off midway, as if there

To call No Quarter Given "good" or "bad" is kind of beside the point. It's a grindhouse  film put in print. Fast-paced with punchy dialogue, sleazy and violent, No Quarter Given is a lot of fun.
Tweet