The Red Dragon Operation (Cobra No 3) (Note: update at the end)

When the KGB teams up with Chinese Triad gangsters in San Francisco to subvert the United States, only Jonathan Skul and his C.O.B.R.A. team-- the Counter-subversion Operations Bureau of Resistance and Action-- has the arsenal, the skills, and the guts to stop them! That is, only if the know-nothing media and those liberal bleeding hearts don't get in their way!

And this is how C.O.B.R.A. #3: The Red Dragon Operation is written! With lots of exclamation points! 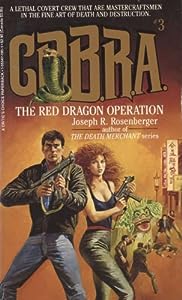 There are very few occasions when I will outright say that a book sucks. This is one of them. I pulled this from my old stash of books that I picked up on the cheap, back when we had things called "used book stores," in the days before our Amazon Overlords took over. Back in the day I bought a lot of crappy-action-schlock. Some of them were okay, a lot were crap. I got rid of a bunch of them, but tried to hang on to the ones that I hadn't read yet. C.O.B.R.A. #3: The Red Dragon Operation was one of them and I finally decided to pull it out of the box and read it. To be honest, I didn't expect an exquisite piece of literary beauty, but neither did I expect it to be so awful. It is truly awful. But it is awful in a way that I find fascinating and eminently entertaining. I'll explain.

First, a little on the author, Joseph Rosenberger. Apparently, his big claim to fame was his authorship of the Death Merchant series, a series I vaguely recall from my youth but don't remember reading. After a little bit of web-sleuthing, I learned that Rosenberger, mostly through the Death Merchant, is known for ultra-violent right-wing action sleaze featuring fight scenes constructed with excruciating detail, incongruous episodes of philosophical ramblings and the occasional excursion into fringe-nutso bizarreness.

There does not seem to be much information on the author, although an interview may be found here and there is some discussion on his books here. All I really know is that he died in the early '90s when he was in his sixties and he used to write for FATE magazine, a magazine that specialized in UFOs, conspiracy theories, that sort of thing. I think I have a couple of issues lying around somewhere. In addition to the Death Merchant series, he also wrote chop-socky kung-fu stories under the pseudonym "Lee Chang" and another series called Murder Master, a 1970s blaxpoitation thing with such wonderfully enticing titles as Operation Hooker.

Also, quite interestingly, a couple of titles authored by "Richard Camellion," the name of the Death Merchant character, have appeared as exclusives sold through Soldier of Fortune magazine. Other than this information, little else is known of Joseph Rosenberger. (*)

There were several C.O.B.R.A. titles and, if nothing else, C.O.B.R.A. #3: The Red Dragon Operation seems to be consistent with the Rosenberger style. It has everything that one would expect from Rosenberger.

C.O.B.R.A. is a government outfit that works outside of the law and this time their mission is to kill Ching Kai Kuo, the leader of a Chinese mob based in San Francisco. Apparently, this isn't as easy as John Skul and his agents thought it would be, since three innocent bystanders, four SF cops and a bajillion (that's a number, right?) Chinese gangsters get iced along the way before they finally get to him. But that is just par for the course for Skul, as Debbie Miles, fellow agent and token sexual-encounter-provider, observes:

Skul was many things. He considered marriage ninety-nine percent sex and five percent misery, and she doubted if he could love anyone. Let's face it. He was a stone killer. Above all, he was a cold blooded, ruthless realist, the kind of man who could be told he only had a month to live and respond with, So what else is new?

But he's so much more (…or maybe less…). Anyway, he does have some interesting ideas about whales:

"Many scientists believe that a whale call, or signal, might contain as many as four million pieces of information," he had said. "In contrast, the Bible contains only three million bits of information."
"That's ridiculous," Debbie had protested. "A human being could talk all day--nonstop--and still not convey four million pieces of information."
"Of course he couldn't. What you're doing is thinking of words. It's believed that whales use a different kind of communication, a more direct brain input. Their system of interpretation would be similar to a computer processing a million bits of information per second. It might well be that whales consider us, with our method of spoken word communication, retarded. For all we know, we might be 'animals' to them."

But to Skul's credit, he makes a point to specifically not harm any of the bad guy's six cats because they don't deserve to be harmed.

The primary bad guys here are Chinese gangsters and even though Skul has three Asian-American agents working with him, Peter Ki-woon, William Lee and Brenda Fong, I was totally unprepared for the racial slurs peppered throughout. Skul says to William Lee and Peter Ki-woon during an assault:

There have to be more of those riceballs waiting upstairs.

I sort of expected Ki-woon and Lee to say something like, "Boss, we're, like, standing right here, dude." But noooo, because, as Willie Lee says:

Our concepts are American. We 'feel' American. Emotionally, we don't think like the slant-eyes in Chinatown. We're of Chinese ancestry, but our value-system is different from theirs.

Yeah, okay, but come on. Wouldn't they feel a little bit offended? "Slant-eyed" and "chink" are words that feature prominently throughout the book. Although Rosenberger seems to make an appeal that most of the Chinese immigrants are honest, hard-working Americans, the slurs appear without apology or irony. Clearly, anyone should be offended, but it's so ridiculous that I'm simply left speechless. Morton Delwater, a fellow agent and resident chopper pilot, ponders on a Chinese gangster cozying up to fellow operative Brenda Fong:

"OK. Take Ralph Sun Jee," Delwater said. "It's well known that Oriental men go ape over good looking white women…Whoever heard of such a thing: a Chinaman wanting to go to bed with a Chinese woman! Shit! It's completely out of character."
Draining the last swallow from his glass, Skul said brusquely, "The sexual idiosyncrasies of one out of millions is not important…"

Morton Delwater, by the way, I find particularly loathsome. As a testament to his effectiveness, Skul recalls reading in Delwater's dossier that he engaged in a particularly ruthless personal revenge campaign in the Vietnam war against "Pepsi cola girls" and "razor blade sluts." The details of what he did I won't even repeat here because its pretty sadistic, but this is presented in the book without any sense of how repulsive his revenge was, almost as if it was a good thing.

As I mentioned earlier, Rosenberger is known for ridiculously detailed and gruesome action sequences. Also, for some reason, almost every single bad guy goon has a first and last name! Weird. Here's a nice example:

The top of Christoper Di-Wau's head went plop, bits of hair, pieces of bones, globs of brain and blood splattering upward right behind the 9mm KTW slug that tore right through the ceiling into the hall of the third floor. The KTW projectile hit Di-Wau between his legs, in the perineum, that small urogential [sic] triangle between the anus and the sex organs. The bullet bored upward through his intestines and stomach, shot up through the long tunnel of his esophagus, cut through the roof of his mouth, tore through his brain and took its exit through the top of his skull. Never had a human being been executed so completely.

And that was just the death of one minor nobody goon!

All in all, C.O.B.R.A. #3: The Red Dragon Operation is a vile, trashy little action novel that probably deserves to be forgotten. On the other hand, I did find it enjoyable in some respects, in that grindhouse, b-movie sort of way. And I am also curious about Rosenberger and his Death Merchant series (funny, the KGB guys referred to Skul as the "Death Merchant" in this one). Rosenberger sounds like a truly weird guy. Maybe I'll try to hit the Goodwill and Salvation army book stacks. But make no mistake: this book is crap.

In closing, I'll leave you with this little gem:

Not today, riceball!
The last thing on this earth that the stupid Hong Di-Lui saw was the black muzzle of the Viking submachine gun in Skul's hand. The next instant he was dead from a half dozen 9mmP projectiles that blew such a large hole in his chest one could have stuffed in a thermos full of Mandarin mushroom soup with "singing" rice!

* 6/17/13 Update! Joe Kenney has unearthed some more intel on the man--probably more than you'd want to know. Yeesh. The guy seems like a piece of work--not in a good sense! Nevertheless, I find it fascinating...and sad. Read about it at Kenney's blog Glorious Trash.
Tweet