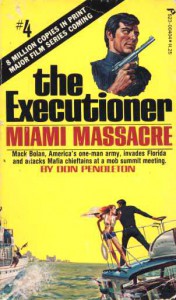 Continuing his one-man war on the Mafia, Mack Bolan (no relation to Marc Bolan, of T.Rex, I presume) gets whiff of a Mafia summit in the matching-white-belts-and-shoes capital of the world, so he heads to Miami to interrupt the proceedings. I predict there is going to be a massacre-- a Miami massacre, to be precise, which is also the title of the fourth in Don Pendleton's 1970s-era Executioner series.

Miami Massacre benefits from actually being written by Don Pendleton, the creator of Mack Bolan, and is the first I've read actually written by the guy. When I was a dumb high-school kid, I'd read these Mack Bolan books published by Gold Eagle, all written anonymously by freelancers. As a general rule, they pretty much sucked, but they sated my adolescent need for action and violence. This original Pendleton-authored one, along with a few others, was in my old stash and I'd never read it. I figured it was time to dust it off and check it out.

Happily, Pendleton's writing is far better than I remember the bulk of the Gold Eagle volumes to be. Bear in mind, we're not talking Dostoevsky here. But Pendleton does have a knack for action and propelling a story along. There is some effective characterization of Bolan which, although not deep, is enough to set him apart from other characters in the "men's adventure" novels of the time.

The book begins with a short prologue, letting the reader know that Bolan, a sniper back from 'Nam, has been fighting a one-man war on the Mafia after a tragic incident involving the Mafia destroyed his family (yeah, we're supposed to know that already). He picks up the lead in Arizona while assaulting a gangster's compound. The guy he's looking for isn't there, but some bimbo getting it on with a Mafia goon is there. After Bolan snuffs the heavy, he learns from the bimbo that Miami is the place to be and catches the next flight out. Arriving at the hotel in Miami where the Mafiosi are staying, he dispatches one goon after another with his silenced Luger, but then the heat gets too hot. Both the mobsters and the cops are now after this legendary vigilante and Bolan's only hope for escape is a Cuban exile name Toro who leads a rag-tag group of anti-Castro guerilla fighters. But can Bolan trust him?

This is a fun actioner that is easy on the brain cells, but it's pretty dated. Written in 1970, it carries the trappings of that time which, to me, makes it that much more entertaining. As Joe Kenney remarks in his review of War Against The Mafia, the first in the series, in his wonderful blog Glorious Trash: "The series is so 'seventies' as to be instantly cool, with a Pall Mall-smoking Mack Bolan who's all sorts of alpha male." Much of this '70s-ness is pretty funny. For example, while at the airport, Bolan disquised himself as a hippie and joined a group of other hippies to throw off the mobsters anticipating his arrival. After his departure, the hippies ruminate on this mysterious stranger:

A round-eyed girl, still a bit breathless with suppressed tension, said, "We should've, you know, found out who he was and why he was hiding. I mean, wow, he could be anybody. I mean it was groovy, sure, but wow! He could be anybody."

"Sometimes you just have to go on instincts," their bearded leader observed. "Like with chicks, you know. You just have to like the look in their eyes and take it from there. I mean, I just looked in those eyes, dig?--and I said, 'sure, man--I'll let you carry my guitar.' And the cat fit, didn't he? I mean, he was a real cool Aquarian, wasn't he?"

Wow, man, you can't, like, find dialogue as out-of-the-world groovy as that anymore. I dig. Those same hippies appear later as Bolan unwittingly crashes their nude beach party! "Oh, wow! This Aquarian makes it by land, sea and air!" exclaims a nude hippie girl.

To sum up, Miami Massacre delivers. It certainly has a schlocky feel, but Pendleton makes no pretense about this being any more than it is, nor does he apologize for it. Plus, he's got the writing chops to pull it off. After reading a Bolan book by Pendleton, I think it's unfortunate that when people think of Mack Bolan they probably usually think of the Reagan-era masturbatory fantasies of the Gold Eagle books. Pendleton's Bolan is pretty fun and I'm looking forward to the other Pendleton-authored titles that I have remaining in my stash.
Tweet