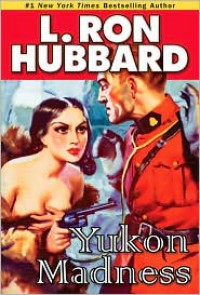 After reading Spy Killer, another in this series of L. Ron Hubbard's pulp writings and one I won in a GR giveaway, I wasn't sure if reading another was going to be worth my time. Blatantly racist and over-the-top corny, still there was a certain amount of fun to reading it. Awful by any reasonable standards, it was like watching a B-movie. So I thought I'd give a go at a couple of others. They are quick reads so what the hell. Despite the fact that these books are bound pretty well, have nice artwork and are generally pretty nice looking paper bound volumes, I'm not going to pay $9.95 for a hundred or so pages of story. Fortunately, my local library had a few titles.

Yukon Madness (hilarious title, by the way) is a collection of three short stories: "Yukon Madness," "The Cossack" and "The Small Boss of Nunaloha." Also there's a short biography of LRH at the end, the same one in the other book and I imagine it's the same for all the books. The first story met my expectations-- meaning it wasn't very good. The other two somewhat exceeded my expectations.

The first story, "Yukon Madness," is a fairly simple affair about RCMP Tommy McKenna's pursuit of an Eskimo dubbed "Itauk the Madman." From the start I know we are in for a racially offensive treat as we read about Itauk "squinting with slanted eyes" across the icy Northern wastes. During his pursuit, Tommy encounters the token love interest, the half-white half-Eskimo Kaja. She is described thusly:

Her face was not that of an ordinary Eskimo woman. It was finer, more delicate. Nor were the eyes slanted. Her figure was slight and although it was almost hidden under the bulk of her furs, Tommy caught an impression of a slender body, small hands, a high, firm breast.

Anyway, Tommy and Kaja instantly fall in love and together defeat the mad Itauk in high cornball style.

"The Cossack" is the second story, in two parts, the first of which is enticingly titled "Sex Lure." It's about a lieutenant in tsarist Russia who gets sexually harassed by a hot-to-trot Duchess. He never gives in, though, and the reader is left bereft of any sexy shenanigans. What we do get is a revenge at the end and a good bit of misogyny. While misogyny, as well as racism, is something I find repellent as a rule, the premise of the story was at least interesting and the outcome unexpected.

"The Small Boss of Nunaloha," the final story, was the best of the bunch and surprisingly well done. In fact, if I were to rate these stories individually it would get three stars. It's about a small-statured merchant on an island in the Pacific who's tough as hell and manages to defeat a bunch of pirates come along to cause trouble. Refreshingly, there wasn't much here in the way of blatant racism and the action wasn't that corny. It was actually a pretty kick-ass story.

These pulp era stories were written in a time when racism was a norm and were written for boys and young men who wanted cheap thrills and excitement. You know, we aren't expecting lit'rachure here and some offensiveness is to be expected. Still, though, I don't think a lot of these stories are worth celebrating because some are blatantly offensive and I find it strange that so many of these LRH pulp stories are being reprinted like this and branded as "good old-fashioned fun." They are by no means good and surely should not elicit pride. But they can be fun, in a B-movie sort of way. MST3K for readers.

The Carnival of Death is next on deck.