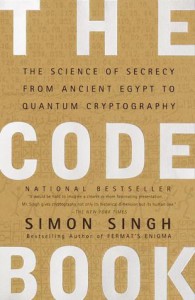 I was fascinated with codes and ciphers when I was a kid. I even had a "junior spy code kit" with a bunch of cool stuff and I could send little notes to friends with secret messages like "Mr. Nutzenjammer is a dork" and "Cindy eats her boogers" and we would all congratulate ourselves with our cleverness. That's all pretty juvenile, but the ciphers included in my little spy kit were the basics in modern encryption systems and you can read all about it in Simon Singh's The Code Book, an excellent primer for understanding encryption methods and a fascinating account of its development through history.

Amazingly, Singh has the ability to make this rather complex topic understandable as well as entertaining. I am by no means mathematically inclined, but Singh explains the processes involved in each cipher he describes through baby steps and multiple analogies. If one doesn't work for you then the next will until you get it. This book actually makes you feel like you're learning something.

Things truly get weird when Singh describes the concept of quantum cryptography, which I won't try to describe but will just say that I re-read that section a couple of times. Although quantum cryptography was just in a conceptual stage at the time of The Code Book's publication, who knows? It might be in usage now. The Code Book was first published in 2000 and a lot has changed since then (probably more than we realize, considering the secretive nature of the topic). At any rate, Singh makes a good point that cryptography, while historically of vital importance in political intrigues, is now of vital importance to most of our daily lives since the internet, for better or worse, has basically connected the world. Because of internet banking and commerce, information security is of prime importance.

Singh also, however, does a good job of telling the stories of code makers and code breakers. Particularly interesting and moving is the story of the brilliant cryptanalyst Alan Turning who committed suicide after the war when attempts to "cure" his homosexuality drove him into a deep depression. However, Turing was one of those unsung heroes working in secrecy, without whom the Allies may very well have lost World War II. Singh's ability to weave these stories into the complex mechanics of cryptography make for an engrossing narrative and one that has excited my intellectual imagination like few others have.

So ditch the "junior spy kit." That's kid stuff. Read The Code Book and you will know how to send inter-office gossip with complete security.