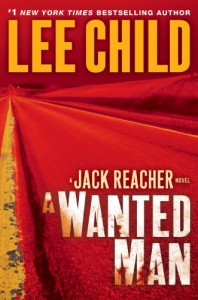 If a six-foot-five, two-hundred and fifty pound hobo with a busted nose manages to hitch a ride with strangers at night you can probably make a safe bet that something is amiss. Turns out there is more to his new traveling companions than meets the eye and Jack Reacher finds himself on a car ride through the midwest that's as thrilling as…well, a car ride through the midwest.

I'm a fan of the Reacher series. While these novels might not be masterpieces of the genre, they are fun and reliable. You pretty much know what you're going to get. Actually, they make me happy. The way a pizza makes me happy. Or a cheeseburger and fries. This one did not make me happy. This was a pizza with pineapple on it. A cheeseburger and fries left to harden in its own fat. I'll still eat it, but it's a little sad.

I don't know if Child is getting tired of writing for Reacher or what, but he was clearly not in good form this time. I honestly think that Child's writing at times approaches the sublime in its clunkiness. He's not trying to be literary. His prose is as subtle as walking into a door, but it is appropriate for the stories he tells and I find his disdain for pretense refreshing. But this time I think Lee Child was phoning it in.

Sure, we get the usual Reacherisms. We get the usual taciturnity, the geeky obsession with trivia and numbers, the smart mouth to the bad guys and the requisite ultraviolent retribution at the end. Reacher goes shopping for new clothes at the dollar store like in every other book. He sees injustice, like in every other book, and a mystery and to sate his curiosity takes extreme and unauthorized measures to set things right. This book has the required elements. But ultimately it was soulless. It was checking the box. Going through the motions. Most of the dialogue was basically reacher thinking aloud with others about what might be going on. And driving. A lot of driving. Here and there, back and forth. Check on this, check on that, drive drive drive.

The conclusion was appropriately violent with Reacher taking on the enemy against all odds, but so what? The bad guy(s) were amorphous, relatively anonymous. Unlike previous installments that often had bad guys that were worthy of our hate, the bad guys here were "terrorists" and some middle-management types. Basically faceless. By the time it got to that point I just wanted to end it already.

Really, I don't know what Child was thinking. Maybe he thought he could coast a little, what with a movie coming out and Tom Cruise playing Jack Reacher. I can't blame Child for letting Tom Cruise play Reacher. If Cruise is in a movie it for sure is going to get made. The road to hell is paved with movies that were sold but never made. So in that sense Child's decision is as practical as his prose and probably a good one.

But still (and this makes no logical sense) I can't help but feel that if Dolph Lundgren was playing Jack Reacher this novel may have been better. Lundgren is physically perfect for the role. He's actually not a bad actor, but he's not as popular as Cruise. I get the feeling that if this were the case then maybe Child would not have set the "Cruise" control on this novel. Maybe he would have felt more of a hunger to make this Reacher novel, you know, kinda good.

But, Reacher and Mr. Child, I have not given up on you. I know they cannot all be gems. I am understanding. Considering the countless hours of mindless escapist enjoyment you have provided me I am still, indeed, in your debt. I am still a "Reacher Creature."

But don't let it happen again. Reacher spoke of a motto in one of the books: Never forgive. Never forget.