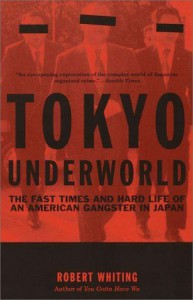 Quick-- what do gangsters, the U.S. Army, professional wrestling, the CIA, the LDP, the military/industrial complex, TV, pachinko and pizza have in common? If you said, "the post-war Japanese underground economy" then you have either read this book or are an extremely abstract thinker. Robert Whiting's Tokyo Underworld: The Fast Times and Hard Life of an American Gangster in Japan places Japan's post-WWII economic recovery in a whole new light. Witness to this recovery and subsequent reversal in economic power is Nick Zappetti, a former GI and would-be mobster turned pizza restaurateur. While introducing Italian-syle pizza to the Land of the Rising Sun, Zappetti hobnobbed with scores of shady characters who matched his own shady proclivities.

Zappetti lived a colorful life in Japan. First arriving in Japan as part of the US Occupation forces, he took advantage of the thriving black market before opening a pizza joint in Roppongi that became the go-to place for expats and yakuza alike. The fact that Zappetti himself had Mafia ties back in New York (at least he claimed) gave him street-cred. His unceasing shrewdness, cunning and willingness to engage in business ventures for which he had no qualifications or experience (eg., making pizzas, pig farming, etc.) in anticipation of the quick buck eventually paid off, making him one of the wealthiest, if not the wealthiest gaijin in Japan.

But Zappetti's associates and acquaintances were equally as colorful and Whiting sketches these characters with subtle wit. Really, there was little more Whiting had to do to make these guys interesting. Check it out.

Rikidozan: the former sumo turned professional wrestling superstar who hid his Korean heritage from Japanese prejudice while he painted the town red in booze-and-pill fueled partying binges, shouting insults he had learned in English, like kokkusakka and kommi basutado.

Hisayuki Machii: the 6'2" 200 pound mob boss known for killing two men with his bare hands and who once worked for American intelligence. Like Rikidozan, he also was an ethnic Korean in a Japan that still marginalized Koreans.

John "Gorgeous Mac" MacFarland: the "Wild Bull of Nebraska," a big American lug who played the role of villain in the pro-wrestling circuit and was later involved in an ill-fated diamond heist. He was known for bizarre lapses in sanity and unusual sexual tastes.

See? You can't make this stuff up. Whiting's account of Japanese gangsters bears little resemblance to the slick, stoic, tattooed yakuza we see in American films. These guys had a sense of honor, no doubt, and were super-tough (imagine taking fifty-three stitches sans anesthetic, or facing a sword-wielding opponent while unarmed). These guys were crazy. And they paid the price for their lifestyles.

They were all in notoriously bad health, with toneless bodies and wan complexions caused by a steady morning-to-night diet of cheap sake, unfiltered cigarettes, and methamphetamines. Many of them suffered from diabetes and thy talked incessantly of of treatments for tooth cavities and hemorrhoids…

Hardly a glamorous picture. The modus operandi of Japanese gangsters changed later, however, to more "white-collar" crime as Japan's economic fortune made a reversal in the '80s.

While the antics of Zappetti et al feature prominently, the subtitle, The Fast Times and Hard Life of an American Gangster in Japan, is somewhat misleading because the greater narrative is less on Zappetti's life than Japan's post-war economic life and the hidden factors that contributed to its remarkable development. Whiting gives us a view of post-war Japanese  economic development that Japanese leaders are probably not willing to readily admit; that a great deal of the economic development was due in no small part to a lucrative underground economy, the players in which were organized crime groups, the CIA, Japanese big business and the Liberal Democratic Party (Japan's conservative political party, despite its name).

Being one of the Cold War era bulwarks against communism, the CIA heavily funded money to the LDP, who, in turn, utilized its extensive underworld connections (A quote from Jiro Ode, president of a finance company, "the Yakuza are part of the LDP. It is a relationship of mutual help, friendship, cooperation, and support. There are no straight lines, nothing dividing them. Everyone is gray.").

However, despite the fact that corruption played an integral role in post-war development, and it could be said that this corruption is just part of doing business in Japan, it is important to note that Western concepts of "corruption" and customary Japanese practices and concepts of "gift giving" and "harmony" are often at odds as Japan faced inevitable cultural shifts in the latter part of the twentieth century. Neither the US nor Japan were completely free from blame. Tokyo Underworld made it apparent that cultural misunderstandings and ignorance go both ways.

Whiting's history of post-WWII Japan is an eye-opening and entertaining account, well-researched and something that most students of Asia, economics or social sciences are not likely to encounter elsewhere. While casual readers might find some of the bits that focus on the greater political and economic areas tedious, I think Zappetti's story, as well as the others that feature, more than makes up for that.