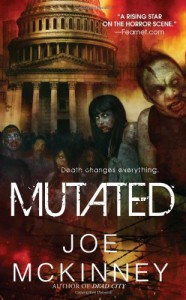 There are a lot of zombie books out these days. While I like zombies, sometimes I think this is too much of a good thing. We see a lot of uninspired, lackluster stories. That's what I found in Mutated. Don't get me wrong-- if you are jonesing for a zombie fix this'll get you by, but I doubt that it will leave you with any lasting impressions.

The prose was okay most of the time, but I think the editors were asleep at the wheel. I don't mind a couple of typos here and there-- and there were a couple here and there. Not a big deal. One thing I can't stand, though, is stuff like this: "But then it donned on him." (p. 234) No, I think you mean it dawned on him. Dawned. Stuff like this drives me up the wall. Even if the writer goofed up in the draft, shouldn't the editor have picked up on it?

Okay, that is a personal pet peeve of mine, and maybe not that serious. It only happened once. Other, more significant, issues prevented this from breaking the two star barrier:

--It seems like McKinney has a really narrow view of how both men and women think and behave. It's almost like he's an alien who has based the behavior of men and women on cliches he's seen in movies and TV. Like, not once but twice Niki Booth, one of the female good-guys, tried using her "feminine wiles" on her captors and both times it almost works. I mean, it works both times to a degree because, apparently, we men have no defenses against the sight of boobs. Ben Richardson, another protag, makes the profound observation that women:

...saw the world differently from men. They weren't pragmatists. Yes, they had reason. But it wasn't the same kind of reason that men had. When they thought about a problem, they didn't think in a straight line, from problem to solution. Their way of thinking made countless loops and diversions on its way to a conclusion. They seemed to thrive on subtext and implied meaning, the kind of thing that men just didn't have time or patience for. Richardson found the whole thing really aggravating.

Yeah. Girls are dumb. Huh, huh. (of course, I'm being sarcastic).
Later on this view is "countered" by another character, Hinton, saying that women are "idiots" because they put up with us stupid men and it's a wonder how all women aren't lesbians.
Okaaay.
Niki Booth seems pretty direct when she deals with zombies in hand-to-hand combat. She's good at that. Just so happens that she gets off on it, though, as character-with-the-key-to-the-cure Nate observes:

Lesson: women are ditzy bubble-brains, but fighting with zombies gets them off.
Makes sense, right? (Again, feel my sarcasm).

--I didn't care for how the zombies were referred to alternately as "zombie," "man" or "woman," and their corresponding pronouns. I get that they are not really undead, but are infected with a virus, but sticking to "zombie" and "it" would have been a lot smoother for me.

--And speaking of zombies, we kind of get by now that zombies are really gross, so we don't need a run down of all the scars, boils, scabs, rotten bits, oozing bits and odors for each zombie. Halfway through the book I think we are well aware that this is de rigueur for zombies. It gets old and after a while it's like, "So what?" Likewise, play-by-plays of each fight are less than exciting.

--I liked the idea of The Red Man as a "zombie king" who could control other zombies. That was pretty cool and creepy, but as a character I had a hard time believing that this former stoner meth-head could lead an army of zombies as well as a bunch of mercenaries. I get that he was an asshole, but really what was his motivation? What was his point? And what the fuck was up with the red paint? I felt like Loren Skaggs checked the box for "Evil Mastermind Asshole," but that was all.

--How the hell did Richardson keep his damn iPad charged?

Overall, the whole thing felt disjointed and incoherent. The plot seemed propelled by just stumbling over upon itself until the end. For that matter, the book could have (should have) been about 150 pages shorter. I was not impressed. By the time I got to the end of the story I could have cared less about how it turned out.

As I said, if you're in desperate need of a zombie fix, this will tide you over, but really there is very little substance here to make it more than a mediocre casual read. I haven't read any of McKinney's other stuff and this title doesn't make me want to rush for them.