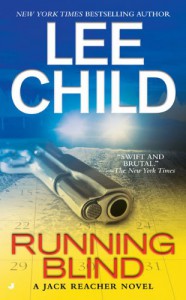 In this one, Reacher is railroaded by the FBI into helping them solve a series of murders and struggles with his personal dilemma between staying with the woman he loves and his wanderlust. I find it hard to be too critical of a Reacher novel these days since I enjoy them a lot. This one is no different, but you have to bear in mind some goofy aspects and get past them, which is not hard to do since the pacing is engrossing.

Some things I learned while reading the novel:
FBI agents are jerks unless they happen to be hot blonde chicks.
Chinese gangsters are easy to locate.
Friends from the army are willing to give you helicopter rides.
The army plays it fast and loose with the way they treat prisoners.

None of the above are necessarily true, of course. The story is full of improbabilities, and Reacher's character is improbable itself. But I that's not why I read a Reacher novel. It's because he says things like this:


(Lamarr:)"But I'm not letting my annoyance get in the way of justice."
(Reacher:)"Well, I am. And if you don't like that, tough shit."


He gets a star for stuff like that.
But of course, Reacher does get justice and solves the mystery in the end. The mystery itself wasnt exactly clockwork and I'd have given it three stars for being enjoyable but not memorable if it wasn't for the fact that reading a Reacher novel is just purely fun. Also, his struggle with his newly acquired and unwanted house is something that I can sympathize with. Talking care of a house is a bitch.

Funny thing, in this novel he never had a change of clothes once, if I recall. He took numerous showers, but I think his clothes would stink after a while. The ladies never seem to mind, though. I wonder, he carries a toothbrush but never clips his fingernails, it seems. Wouldn't he need a fingernail clipper, too?

Again, Reacher in my mind was closer to DOLPH LUNDGREN than Tom Cruise. Just saying.
Tweet