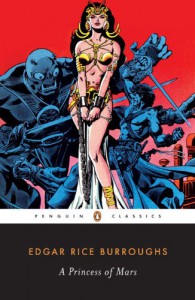 Fun and Interesting, mostly. A lot of action and plenty of detail to contribute to the world-building of Barsoom, without getting bogged down by the details. At times, however, the details were almost its undoing, since there were moments that almost felt like I was reading a travel guide of Mars. There were a couple of other aspects that were hard to swallow. For example, like another review pointed out, John Carter is just too full of awesome. He is super-strong (on Mars), a mighty warrior, master tactician. He can do no wrong. Okay, I realize this is pulp, but still. I think I probably had fantasies like this when I was a kid, like a lot of kids probably do. As an adult, it all seems a bit much. But this is pure escapist fantasy, and a fun one, so I'll let it slide.

Even John Carter's main goal is kind of juvenile. His goal is to GET THE GIRL! He's gotta win the heart of the Princess. He does all that adventuring and fighting and killing for luvvv... Sort of corny and it made me roll my eyes more than a few times, but I'm not complaining, I guess. Although it is a bit unenlightened and chauvinistic, it's nice to read a "save the princess"-type story once in a while.

John Carter getting to Mars (via his Earthly death and astral projection, or whatever) is a little weird and kind of contrived. I think it's just a plot device to get him to Barsoom. This, along with John Carter's peculiar immortality gives us several questions that we'll just have to keep wondering about.

But if you're a kid, you can just forget about all that. Or if you just want to remember what it's like to be a kid and escape the daily grind for a while and go to Mars like John Carter, you can forget about all those pesky details and just focus on the adventuring. While it may not be an example of classic literature, and it certainly isn't deep or thought-provoking, it's a good bit of fun.
Tweet