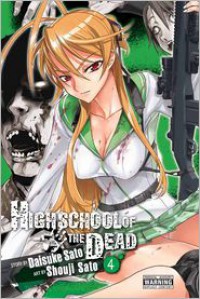 Maybe it's not totally fair for me to review the series since I haven't picked them up in order. See, I pick them up from the library when they're available instead of buying (the price for each volume, as with most books these days, is a little steep for my broke self). Consequently, I get them out of order and sporadically and I'm not getting a complete picture of the series overall. But I can review what I have read and my impressions.

And just to be clear, I like manga, but I'm not a manga nut or anything. I can't keep up with western comics these days, much less what's going on in the Japanese comics scene. But I am a life-long comics fan in general.

The story was pretty okay. I enjoyed it, but there were a few things that bugged me. One, I think some of the script was kind of goofy and I think part of that was due to the translation, but I can't verify this since I haven't read the original Japanese. Many of the (English) sentences were awkward and this broke the flow for me. Two, I wasn't too hot on some of the silly humor. Personal taste, I guess, but I generally prefer a more consistent tone overall. The third aspect has to do with the art, which was good and less than good. Don't get me wrong-- the art was technically awesome in the individual panels. However I didn't feel like the panels always flowed well enough to convey the story smoothly and all the action was just too fast. I got a little confused at times.

Overall, though, it was enjoyable. I might not go out my way to read the rest of the series, but if I see some other volumes pop up at my library I'll be sure and pick them up.
Tweet