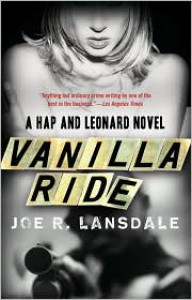 How did I not discover Lansdale sooner? This was my first, though it won't be my last. Lansdale has the gift to come up with some of the most hilarious things in the tensest moments. "The shot tore at the couch and I felt pellets hit my ass so hard one butt cheek slammed against the other." I sometimes almost laugh out loud. His turns of phrase are almost genius. It was a joy to read.

Characterization is also top notch. Hap and Leonard are such an unlikely duo, but there is nothing contrived about it. Their banter just flows. Hap's development was the most prominent, being told in his first-person POV. Leonard's was a little more subtle because of this. But it is clear that these are not cardboard cut out action heroes. They are totally alive. At least they felt that way to me.

At times the plot seemed to wander, but that's not too much of a complaint, considering how much fun it was to read. Will definitely read more Hap and Leonard in the future, as well as everything else Lansdale has written.
Tweet