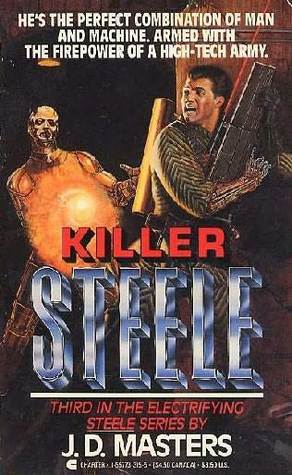 Lt. Donovan Steele was a good cop until he was killed. Then, he got even better. Advanced technology resurrected him in a robot body--computer brained, atom-powered, and supremely strong. Now this one-man SWAT team brings his own brand of justice to the savage world of tomorrow.

This, from the back cover copy, is a good summation of the early-'90s Steele series. In the aftermath of a devastating biological war, Steele is a cop in the Strike Force, an elite police outfit that operates out of New York City. After a deadly ambush, Steele is killed, but is revived through advanced technology and reborn into the form of a crime-busting cyborg. It's a bit like Robocop, but Steele, even though his brain is computer, still retains engrams that model emotion, so for all practical purposes his mind is still human.

All that stuff happened in the earlier volumes. Killer Steele, the third installment in the series, brings us up to date with a few quick info-dumps and then gets into the matter at hand. Another cyborg cop has been created, code-named "Stalker." But this one went nuts, killed all of the scientists and technicians and busted out of the place with one goal in mind: getting revenge on Steele. Turns out that Stalker is actually Steele's former partner and best friend Mick Taylor, who also "died" on the same day Steele did. However, something went wrong with Mick's programming and his memory is twisted, thinking that Steele left him to die. Equipped with a built-in laser and plasma gun and driven by rage, Stalker raids street gangs for their weapons and recruits the deviant underground dwellers that live in NYC's sewers for his own personal army.

Meanwhile, Steele is having some issues of his own as his son Jason turns up at his apartment with a busted up face and a story to tell. Jason and Steele's daughter Cory live with his ex-wife Janice, who never told them that Steele was still alive. But after running away from home, Cory got mixed up with a pimp and got "turned out," Jason went to rescue her and got his ass beat and now has made his way to his dad's place where he lives with his new main squeeze, an ex-hooker named Raven whom he rescued in a previous episode.

Steele's heartbroken when he sees his son horribly beaten by Cory's pimp ("If he could have wept, he would have. But bionic eyes don't cry.") and he's filled with regret at missing out on raising his kids, but vows to get Cory back. He's in a bind, though, because stopping Stalker is a top priority. Well, no one said being a cyborg super-cop was easy. But with the help of Raven, and an ex-gang leader and now friend named Ice, Steele scrambles to scour the city for Stalker while at the same time tracks leads to Cory.

If that wasn't enough, a cyber-psychiatrist working on the Steele Project named Dev Cooper feels enormous anxiety about the moral and ethical of storing human psyches as computer data. There are practically two "Steeles" now: one as a cyborg super-cop and one on disk and they are both sentient. Dev handles his guilt and stress with drink and drugs and "Steele 2" hacks the Strike Force computer network, an ominous portent for future episodes.

That's a lot of stuff for 185 pages, but J.D. Masters (a pseudonym for Simon Hawke, I think) does a good job of keeping up the pace, lending a real "cinematic" feel to Killer Steele. It reminded me a lot of those Filmation cartoons I'd watch after school as a kid, only with a lot more sex and violence.

Killer Steele is third in the "electrifying" series. I haven't read the first two, but I kind of wish that I had the whole series to read back to back because I get the impression that it's somewhat continuity-heavy, unlike many other "men's adventure" type books. Not that it's hard to simply jump into, but I think one might get more out of it if read back to back because, if Killer Steele is any indication, there are going to be some interesting, life-changing developments for Steele. I don't want to give away any spoilers, but let's just say that Cory's rescue didn't go as planned and the book ends with Steele's status uncertain.

Overall, Killer Steele is good, cheesy fun with exciting plot developments and even some good characterization. I hope to come across more of these someday.