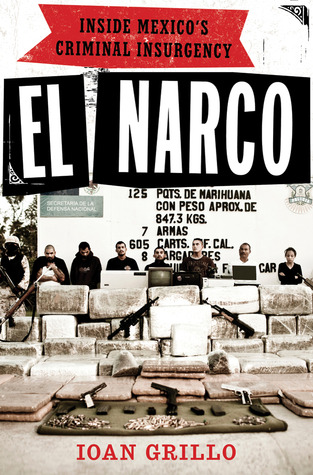 Drugs have been a part of Mexico's underground economy for a long time, but recent years (as of around 2008) have shown a marked increase in the activities of Mexican drug cartels, activities that have escalated to an unheard of level of brutality. It's a frightening thought that just south of the border drug gangs are battling it out with AK-47s and rocket-propelled grenades, decapitating heads and wiping out entire families. It sounds like an exaggeration, but the barbarism of the Mexican drug cartels is hard to fathom.

Mexico City-based Britisher Ioan Grillo has been reporting on Mexico for over ten years and in El Narco: Inside Mexico's Criminal Insurgency he explores this new era of violence in which Mexico is now embroiled, supporting his main thesis that the Mexican drug cartels are not simply criminal empires but have developed into full-blown insurgencies that threaten to destabilize Mexican society.

You have to hand it to Grillo. He's got guts taking on this topic. But in addition to that, his survey of narco culture looks at the issue from angles that I had not considered before, showing that this isn't just a study of organized drug crime, but a complex issue with a lot of moving parts. Grillo covers an overview of Mexico's history with drugs up through the current crime wave, as well as covering cultural, societal and political implications of the drug trade. It's a fascinating and complex issue, one that can't be solved with an overly simplistic hard-line stance of a "war against drugs," as recent history has proven. Grillo doesn't propose any solutions, but seems to indicate that a whole paradigm shift in the way we look at the problem may be in order. Particularly interesting, from a gringo's point of view, is the role that the United States plays in fighting the drug trade as well as enabling it.

The cartels themselves are fascinating also, but in a disturbing way. You really have to wonder about the psyche of people that murder entire families for retribution or sew faces onto soccer balls to send a message (yes, this happened). The power of these cartels also far exceed even what Americans usually consider to be heavy-hitters in the organized crime world. In the case of Los Zetas in particular, these cartels have capabilities that rival multinational terrorist groups like Al Qaeda. They even have paramilitary training camps to train new recruits. A frightening thought indeed. Grillo also notes the the Zetas have expanded their operations to include producing pirated DVDs of commercial films. I never considered pirated DVDs to be such a bad crime before, but when you consider that the profits support a group that massacred over seventy innocent migrants in a single incident in 2010, it really makes you think.

Grillo provides an even-handed analysis of the situation in Mexico and writes with appropriate gravity on the toll of the extreme violence taking place, while at the same time eschewing "true crime" sensationalism and not being alarmist. Things are bad enough down there without sensationalizing the violence. For those interested in learning about the drug situation in Mexico and its impact El Narco is an excellent starting point, being a sobering overview of Narco culture.