Daredevil Noir, by Irvine and Coker 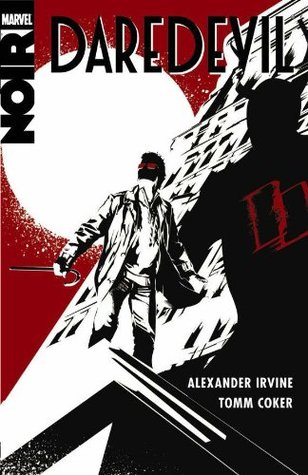 Y'know, graphic novels don't take very long to read and since I have some kind of compulsion to write a little something on everything I read graphic novels can really bog me down. I can read 'em faster than I can write anything meaningful about them. I'm thinking I might just save graphic novels for one big long post.

Anyway, that's housekeeping stuff. Today we've got Daredevil Noir, (is that like Drakkar Noir?) a part of Marvel's "noir" line, reinventing the superheroes you know and love into a "noir" atmosphere. A neat idea in theory, I think but too often these things are just kind of gimmicky, relying on the atmosphere at the expense of the story. Throw a lot of black ink in the artwork and there you go.

Daredevil Noir, written by Alexander Irvine and illustrated by Tomm Coker, collects issues #1-4 of the limited series and is sort of like that. Here Matt Murdock is reinvented into Prohibition-era America (but they goofed in one city-scape shot with a television appliance store sign in the corner). This time he's not a lawyer but works for Foggy assisting in his investigations by day and doing Daredevil stuff at night. He gets a lead on the guy who shot his father when he was a kid, falls in love with a femme fatale (in the most literal sense) and goes after the Kingpin, who looks to be a good deal leaner that we normally expect him to be.

While Daredevil Noir doesn't really have any serious problems, there's nothing remarkable about it either. The art is fantastic, the script is good too, but there's just not a lot to work with plot-wise and doesn't really make a lot of sense. It relies too heavily on trying to have a dark "noir" atmosphere, seemingly at the expense of all else. All in all, Daredevil Noir is an okay read, but is a bit of a novelty and not that special. Still, it's an enjoyable read for Daredevil fans.