Invasion of the objective case plural pronouns: Them by William W. Johnstone 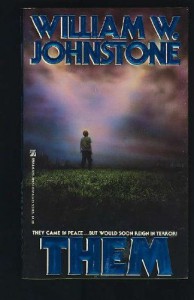 Every once in a while one comes across a book of such rare beauty that to read it is to feel as if one's soul has been touched, as if all the truths of the world have been concentrated into a single sublime marvel of language. Well, Them by William W. Johnstone ain't that book. And for a horror novel, it isn't even really scary. And for any sort of novel at all, it isn't really very good. In fact, you could call it lousy. But if you're like me and enjoy B-movies and trash lit, Them can be pretty entertaining (which sounds ungrammatical when you say it aloud).

Written by prolific drivel-meister William W. Johnstone, Them is about a genius kid named Jake Silver who has a hard time because of his superior intellect in the small town of Sandy Run, inhabited by rednecks, jocks and cretins. Bullied by kids at school and beaten by his dirtbag father Paul, Jake has a huge chip on his shoulder that, in fact, is just the germ of a budding psychopathic rage. His only friends are the beanpole Terry and fat Dick, also genius nerds, and his pretty and sympathetic mother Crissy. Even his older sister Judy hates his guts. He's got a baby sister, too, named "Lyn," but she hardly makes an appearance. We're always told that she's "staying at a friend's house" or something, so I don't even know why she's in the book.

Anyway, one day while Jake is at the lake with his mom and sisters, he comes across a pulsating, glowing football-sized brain sitting atop a mass of tentacles. The "brain" communicates with Jake telepathically (in a voice that I imagine to sound like Kelsey Grammar) and explains that he is called Cag and he's a representative of a race of advanced alien beings. Cag's sent to Earth to check things out and, sensing Jake's far superior intellect, makes fast friends with the lad. Jake welcomes Cag's friendship, but it also sparks an ambition for vengeance on the cretins that bully him.

Meanwhile, another bunch of brain-beings led by the sinister Kor is en route to Earth. Kor is the leader of a group of aliens that eschews Cag's diplomatic philosophy and prefers to take the Earthlings and their planet by force. These space-brains have the ability to take over people's minds and turn their wills to putty. It isn't long before the townspeople are fighting amongst each other, controlled by either Cag's or Kor's forces. Running around in all this mess trying to figure things out are the local cops and Charles Massenet, a local doctor and the man Crissy is cheating on Paul with.

That's basically how it goes. It starts out sounding like the story is going to focus on Jake's plan for revenge and shifts into a huge battle in the town between the two opposing groups of space-brains. While that's technically a plot flaw I guess, there's enough craziness going on in the meantime to make Them bewilderingly awful and bewilderingly entertaining. Most notable is Johnstone's penchant for inserting weird sexual situations for no apparent reason. For example, early in the book Paul orders his son Jake to drop his pants so he can give him a whuppin' with his belt and Crissy (his mom), in shock at her husband's cruelty…

"…could not but notice that her son was more than amply endowed. Like his father. And for some reason she could not explain, she had more than a suspicion that Jake had not been a virgin for a long time.

Seems like a weird thing to notice, huh? Judy, his sister who hates his guts, is even weirder since she gets aroused by watching dad beat the shit out of Jake with a belt, as Crissy discovers to her outrage. Later on Jake learns from Cag that Judy has been willingly having sex with their dad, to which he simply replies, "I've always found both of them disgusting."

Jake is no angel either, though. He's got the hots for a pretty teacher at his school named Faith Forlund and plans to have Cag use his mind control powers to maker her fall in love with him. With Cag's assistance, he arranges to have a little party at his place and gets Cag to put a little telepathic nudge in Faith's brain, making Faith uncontrollably attracted to the fifteen-year-old Jake. She arrives at Jake's party and they go off to get it on. Jake, being the considerate sociopath he is, has not left his friends out of the fun. He has Cag control Judy's mind to provide sexual entertainment for Terry and Dick! None of the sex in Them is described explicitly, so it's not like reading Penthouse or anything, but there's enough sex in it to make Johnstone seem like a dirty old man. Probably more likely he just wanted to spice up the narrative with some cheap titillation. It's not really titillating, but it's pretty unintentionally hilarious.

Also hilarious is the way the inhabitants of Sandy Run are described. Take all the stereotypes of Southern country folk and there you have it. Just about every other townsperson is a closed-minded degenerate who cares only about beer, football and rock music (rather than "fine" things like classical music or science or proper English). Seems sort of like Johnstone has a beef with small-town people. Particularly funny is the episode of Dickie Johnson. Dickie is a very large mentally disabled man who most people think of as harmless, but is, in fact, a serial killer! He hasn't killed for a while, but being released from the mind control of some space-brains sends him over the edge. He grabs a double-bit ax from the barn and starts his Lizzie Borden routine on the town. He eventually comes across another mentally disabled person named Lou Ann:

God, she was shore ugly when you got up close. Hair all tangled up and matted, no front teeth, great big mouth and little bitty eyes. She wore a dirty dress 'bout four sizes too small and nothing under the dress.

He asks her of she wants to go into town and "go splat on people." She replies with her universal grunt, "Uhhh," and together they run around "splatting" people with axes and hatchets. The whole deal is pretty funny. Especially since Dickie was a serial killer already and this could have happened regardless of the space-brain invasion.

The verdict: ★★★✩✩, but probably not for what the author intended. As a horror novel, Them is pretty stupid, but it's a fun read if you don't take it seriously. I haven't read anything else by Johnstone, but I know that he's written a ton of stuff. I'm just assuming that he was sincere in making this a horror novel and not a spoof or "horror-comedy," but it's pretty damn funny. I'll be keeping my eye out for any more of Johnstone's horror stuff that comes my way.

I've been on a steady diet of junk-food lit lately. I may have to read something of literary merit pretty soon or I'm liable to forget what that's like.