The Girl Next Door by Jack Ketchum 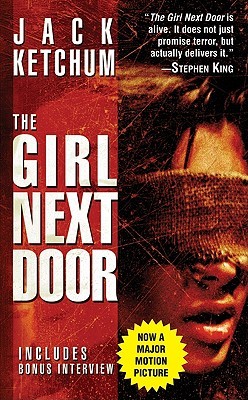 I'm going to change that now if I can. I'm going to tell our little story. Straight as I can from here on in and no interruptions.

And I'm writing this for you, Ruth. Because I never got to pay you back, really.

So here's my check. Overdue and overdrawn.

Cash it in hell.

Horror fiction to me is a lot about fun. Despite however much fear, blood, gore and horrific goings-on, there always has to be an element of fun, a little bit of perverse glee that you can't take seriously. Jack Ketchum's The Girl Next Door, however, goes beyond all that. It is too horrific, too brutal, too real. The Girl Next Door is not a horror novel; it is a frightening display of human depravity, and a deeply moving paean for the innocence of childhood. The Girl Next Door is not a horror novel, but it is a superb novel and one that, if you can make it through, will stick with you for a long time.

The narrative is told through 41-year old David as he recollects Wonder Years-style on his childhood in the 1950s. It's summer, carnival is coming to town and a new girl moves in next door. After the death of her parents in a car accident, Meg and her little sister Susan move in with their cousins, Ruth Chandler and her boys. David befriends Meg and develops a little crush on her, but soon this childhood idyll turns sour when David learns that Ruth has it in for Meg and has it in bad. From aversion, to hostility to downright hatred, Ruth, with assistance from her boys, makes life a living hell for her new ward. Eventually, even some neighborhood kids are enlisted in this torment and David finds himself in the middle of an ever-increasing whirlwind of sadism and brutality, one which David is helpless to stop, to his lifelong shame.

The Girl Next Door is based on the real-life case of Sylvia Likens, whose situation bears a nearly identical resemblance to Ketchum's fictional story. Ketchum explains in an afterword that one of his intentions in writing The Girl Next Door was to express his own revulsion of the perpetrators of the real-life crime. This is something I can understand. The case of Sylvia Likens was an event of nearly unbelievable wickedness and the perpetrators, in my own opinion, never got the punishment they truly deserved. In Ketchum's own way, the perpetrators did, and Meg is presented not only as a victim of cruelty but also as somewhat of a hero or a martyr. Like David's overdue, overdrawn check, this is payback, maybe as best we can. But it's apparent that no one comes out of this unscarred.

The Girl Next Door is horrific on several levels. It's horrific because it's real; no monsters here, except of the human variety. It's horrific that one can be blind to such cruelty, either unwittingly or willingly. It's horrific that children should be cheated of their deserved innocence, that their senses of the world should be tarnished so soon. The Girl Next Door is a hard novel to take in, but Ketchum's handles it well, expertly expressing the atrocity with a sensitive touch as well as the narrator's sense of guilt and shame at his helplessness to prevent it, or his complicity. This is not torture porn horror. There is no sensationalism or revelry in the atrocity. On the contrary, it is heartbreakingly sad.

The verdict: ★★★★✩ (4/5, excellent) The Girl Next Door is frighteningly excellent and deeply moving. This was the first Jack Ketchum novel I've read, but it definitely won't be my last and, judging by his work here, he may go on to be one of my favorites. This paperback edition I read also includes an interview section and two short stories ("Do You Love Your Wife" and "Returns").

But make no mistake. The Girl Next Door is highly disturbing. This is not the kind of horror that makes you giddy with fright; it's the kind that makes you sad for humanity and hope that a hell exists because some people don't deserve to rest in peace. It's definitely a novel worth reading, but make sure you have a happy place to go after you're done. You'll need it.