Jack Reacher gets Personal in September

I'm  reading Charlie Huston's Already Dead right now. I'm about halfway through, so no review this week. I like it so far. It's not a long book, but I'm taking my time with it.

But yesterday I learned that the next Jack Reacher book, to be entitled Personal, comes out in September! 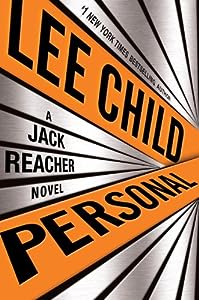 I guess it's not really new news. I think it was announced in January. Nor is it unexpected, either, I guess; Child's been pretty steady with a book a year. But still, it's good news. I don't know why I didn't know about it sooner. Here's the synopsis from the official website:

Jack Reacher walks alone. Once a go-to hard man in the US military police, now he’s a drifter of no fixed abode. But the army tracks him down. Because someone has taken a long-range shot at the French president.

Only one man could have done it. And Reacher is the one man who can find him.

This new heartstopping, nailbiting book in Lee Child’s number-one bestselling series takes Reacher across the Atlantic to Paris – and then to London. The stakes have never been higher – because this time, it’s personal.

I was previously a little bummed because, aside from the short stories, I only have The Enemy left to read and then I'd be all out of Reacher. No Reacher to reach for. But now I can look forward to Personal. I know it's not high-lit, but these Jack Reacher books are my mac 'n' cheese; they make me happy. When I start to feel bad about my life (...gotta mow the damn lawn again, grumble grumble...property taxes are due, grumble grumble...toilet's acting up again, grumble, grumble...) I can read about the adventures of an oversize homeless man with a penchant for head butting fools. So I guess now I can get around to reading The Enemy soon.